At times like this, words fail us. We are struck silent by the sheer barbarism and scope of the tragedy: the cold blooded murder of Rabbi Gavriel and Rivkah Holtzberg -- a young couple who left behind all of the creature comforts of life in the West to go and help other Jews -- four other Jews shot dead inside the Chabad House, another 169 people killed, and 240 wounded.

I personally benefited from the self-sacrifice of the Holtzbergs. In 2003, they moved to Mumbai, giving up the comforts of the West in order to spread some light in one corner of the world. They purchased and renovated the building formerly known as the Nariman House into a beautiful five-story hotel, full of rooms for guests, dining rooms, and large pantries to hold all the kosher foodstuffs necessary to feed the multitude of visitors each week. The Chabad House was a glowing beacon of holiness in a city filled with poverty and starvation.

A few months ago, I left my family behind to travel to India to carry out fieldwork and research. Long before I stepped onto the airplane, I knew I'd be in good hands -- friends contacted the Holtzbergs to ensure that I would have a place to connect with other Jews, pray, and have a warm, home-cooked meal. 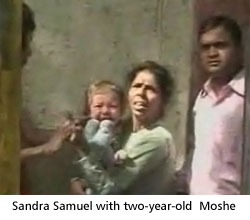 During my month-long stay in India, I met Sandra Samuel, the helper and nanny for the Chabad in Mumbai for several years. Sandra overcame the natural instinct of self preservation and re-entered an upper floor of the Chabad House to rescue Moshe, the Holtzberg's 2-year-old son. She later recalled, "I just grabbed the baby and ran out."

The baby became an orphan in blood-soaked clothes.

I doubt that many of us would be able to look past our own selfish desire to save ourselves and put ourselves in harm's way. She is one of no doubt many quiet heroes who have emerged at these horrendous times.

Every night that I visited the Chabad House, the place was packed with Jews from around the world who had come to Mumbai. Some were Israelis looking for a chance to relax after an intense tour in the Israeli army; others were businessmen seeking to cut deals with the well-known textile merchants nearby. Some were tourists looking to experience the local Indian Jewish community known as the Bnei Israel. The Holtzbergs made sure that all of us felt welcomed and comfortable.

Rabbi Holtzberg was a Torah scholar and trained as a mohel and shochet. Together with his wife they ran a synagogue, taught Torah classes, counseled drug addicts, and fought the poverty they saw all around.

Most of all, they helped us to feel Jewish. Even those soldiers who had long ago stopped attending synagogue wiped back a tear as we sang "Shalom Aleichem" around the Shabbat table.

This is not the first time that a Chabad rabbi has been cut down by a terrorist. Back in the 1950s, a rabbi and four students were killed in the Israeli village known as Kfar Chabad. These residents had arrived from Europe, leaving a land decimated by the Holocaust to rebuild a new Jewish society in the miniscule land of Israel. After their death, many of their friends felt the hopelessness and despair we feel now.

It is said that the Lubavitcher Rebbe sent a telegram to the survivors of the attack that had only three Hebrew words: B'hemshech habinyan tenu'chamu -- "You will feel comfort through continuing to build."

And that is the message for us today: Continue to build. Do not give up. Do not let hate or a desire for vengeance blind us to the positive impact that all of us can have.

Because if we become afraid, immobilized, hesitant, then we've handed the terrorists a victory.

Words may fail us, but actions cannot. The Jewish community has already come together over this issue; thousands of emails, blogs, and websites have called upon Jews around the world to say Psalms, give charity, and do acts of kindness. On online bulletin boards where tempers can too often flare, arguments were quickly shelved and cooperation ensued.

We can all put our grief, our disbelief, our desire to do something into action -- and we must do it quickly. Send money to a Jewish cause. Spend some time telling your parents, children, and friends how much you love them and care for them. See what positive things you can do for an ailing neighbor or a depressed friend.

We are at war with many enemies, those who seek to turn our planet to darkness. The Holtzberg's were on the front lines of dispelling that darkness, putting the beauty of Judaism against loneliness and despair. For many of the backpackers and visitors, coming into contact with the joy and love extended by Rabbi Gavriel and Rivkah Holtzberg gave them their chance to embrace their Jewish heritage.

They were struck down in the line of duty. So in their memory, learn about the beautiful Jewish heritage they sought to spread. And share it with others.

In the comment section below, share your thoughts and condolences, which will be forwarded to the families of those who perished in the Chabad House of Mumbai.

This article can also be read at: http://www.aish.com/jewishissues/jewishsociety/Tragedy_in_Mumbai.asp

Author Biography:
Rabbi Dr. Daniel P. Aldrich received his semicha from Rav Dan Channen, shlita and he is a alumnus of the Darche Noam Yeshiva of Jerusalem. After his house was destroyed in Hurricane Katrina, he and his family spent a year living in East Asia. He currently lives with his family in West Lafayette, Indiana where he and his wife Yael work to spread the love of Torah among Purdue University students and the community.